The crate of Coca-Cola was heavy. Not unmanageably so, but weighty in a way that I was content to lift it up and put it down just the once. The thought of humping dozens of them off a truck and into a warehouse did not fill me with joy.

However, I was wearing Panasonic’s Atoun Power Suit, a kind of robotic backpack, and it was about to make life much easier. Near my hips I felt motors whirr, and rods attached to the straps around my thighs started to flex. It was taking some of the strain for me as I lifted the crate again, lessening the stress on my body.

I wasn’t lifting my crate in a warehouse, but in the Panasonic Centre in Tokyo, Japan, and this incredible piece of mobility tech was just my introduction to Panasonic’s tech involvement in the 2020 Tokyo Olympic Games. An insight into future tech innovations suited to sports events, and its plan for the opening ceremony, was still to come.

Panasonic’s Atoun Power Suit isn’t new, but next year it will become the first ever piece of robotic equipment to be used in the Paralympic Games. Specifically, it will be used during the Powerlifting event; but don’t worry, the competitors won’t have it on their backs. Instead, it will be worn by the spot-loaders who load up the massive weights that the Olympians will be lifting.

What is the Atoun Power Suit, and what does it actually do? The temptation is to assume it increases you strength, but it doesn’t. It decreases the stress on your lower back when picking up and putting down heavy objects. At the Paralympics Para Powerlifting event, the spot-loaders are the people putting on and taking off the weights the competitor will lift. The spot-loaders lift and lower all the weights throughout the event, and due to the sheer amount of weight — athletes can lift up to three-times their own body weight, meaning anywhere up to 295kg, or 650 pounds — not only is fatigue going to set in quickly for the spot-loaders, but there’s also the chance of serious injury.

Panasonic Atoun Power Suit from the back. Andy Boxall/DigitalTrends

The Atoun Power Suit takes some of this pressure away. Motors are activated by angle sensors in the suit — which is really a backpack with straps attaching it to your chest, waist, and thighs — when it notices a change in the angle of your body. The compensation the suit provides is approximately 10kg, and a dampening effect softens impact. Wearing it, you don’t feel like the suit is “adding” anything to you, but that it’s more like a body shock absorber. You feel almost like someone is behind you pulling you into an upright position. It’s uncanny at first, especially when it activates and you feel it brace and tighten; but you quickly become used to it. It doesn’t just work on the upward motion either, it also has a braking system to help when you put things down too.

The pack itself is 4.5kg, and because it’s strapped tightly to your body, the weight is evenly spread and you never feel like you’re lugging around a heavy piece of equipment. You can hear the motors working, and there are solid physical buttons on the side to adjust the amount of energy the suit puts out. It’s all powered by a battery pack which will last for about four-and-half-hours before it needs a recharge. Although I had some help putting it on, with a little practice you can do it on your own. It’s an exciting piece of beneficial, non-invasive, body enhancing technology. 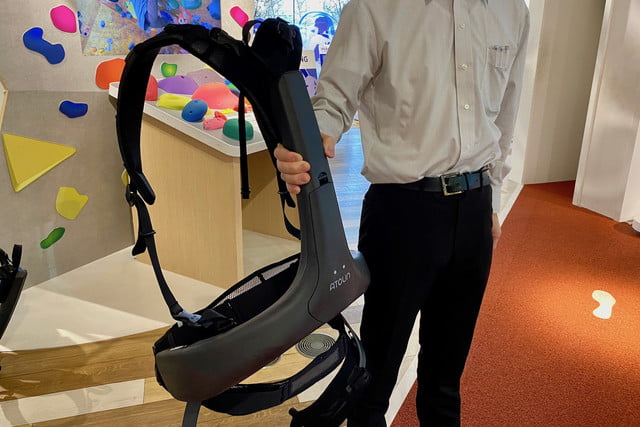 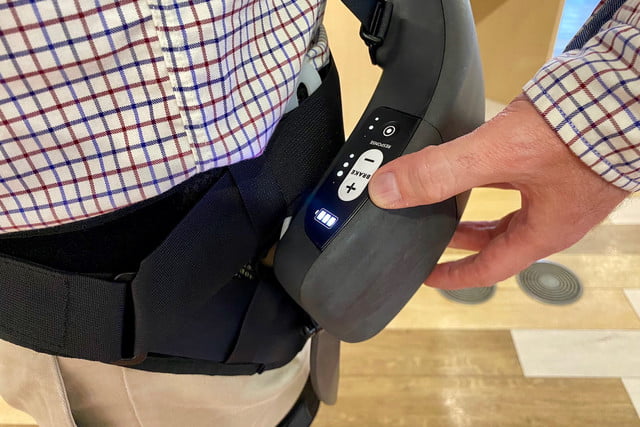 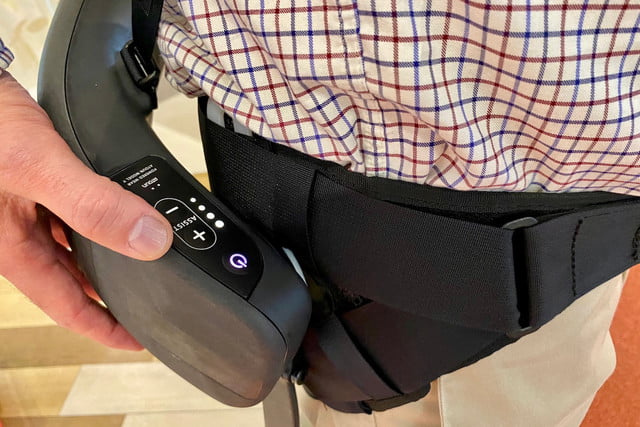 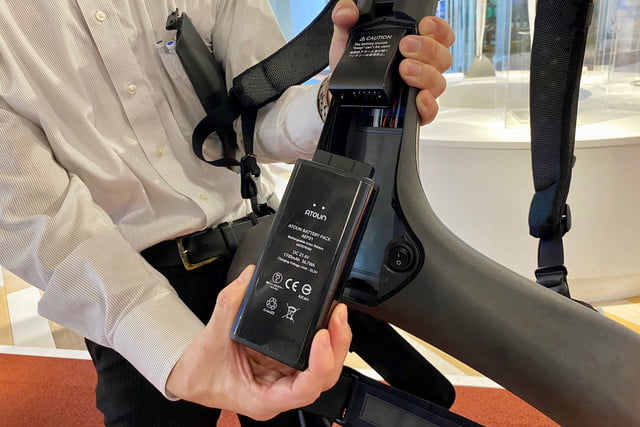 Panasonic’s intention with the Atoun Power Suit at the Paralympics is to help the spot-loaders work longer with fewer physical problems. What would have been a 10-minute work session becomes a 20-minute session for those wearing the Power Suit, and during that time there is less chance of anyone injuring themselves. It’s similar to how Panasonic already deploys the Atoun. In addition to factories, older people working on farms in rural areas in Japan wear the Power Suit so they can continue working when normally, where otherwise the physical strain would make it either impossible or painful to perform their tasks.

In addition to the Atoun Power Suit being used in the Paralympics, Panasonic’s also working on other exciting technology to not only make it easier for people to attend and enjoy the 2020 Tokyo Games, but also to make the opening ceremony even more spectacular than usual.

I was given a tour of the public exhibition of Panasonic’s Olympic innovations, along with a glimpse behind the scenes at what it may introduce for future Games too. Tokyo will be dotted with Panasonic’s new electric power boxes, which will replace some of the overhead wires that dominate the city’s streets now, and these installations also incorporate large screens that show local information, safety information in the event of a natural disaster, and provide a public Wi-Fi hotspot — something lacking in the otherwise well-connected Tokyo).

It’s joined by a new eco-friendly open-air cooling system to help visitors cope with Japan’s summer heat. Nozzles spray a fine mist into the air, which unlike similar systems that make you damp, this does not. The fine spray is also ice cold, and is currently being trialed inside some of Tokyo’s subway stations. Finally, a convenient way to transport luggage from the airport to a hotel or sports venue will be introduced, which after pre-booking just needs a QR code to be scanned on arrival to put the service into motion, and doesn’t need an understanding of the Japanese language.

Going behind the scenes at the Panasonic Centre, I got a glimpse at what the company is working on for the future. Although none of it is specifically for the Olympics, the technology could be easily transferred over to a range of sporting environments. I took a ride in an autonomous wheel chair, which is designed to transport people with disabilities around large areas. Sensors at each corner avoid crashes, a smartphone controls the destination and is logged into using face recognition, and it’s so safe that it won’t set off if your feet are not properly placed on the footrest.

Using a series of cameras and some artificial intelligence algorithms, Panasonic has a way to track people’s movements in a fixed space, ready to show muscle balance, flexibility, and through a 3D visualization, form and motion too. Just three cameras watched you walk and move around, and then statistics are displayed on a screen, along with an instantly created visual model too. This, along with a smart camera system that identified heart rate, emotion, and concentration levels could provide greater insight into an athletes performance, all without any intrusive wearable tech.

As one of the top Olympic partners, a wide array of Panasonic hardware is used during the Games, ranging from screens and broadcast cameras, to security equipment and projectors. For the 2020 Tokyo Olympics, it will build once again on its presence during the all-important opening ceremony, and even more Panasonic projectors will be used during it for a technique known as projection mapping.

The type of projector Panasonic uses for its projection mapping shows. Andy Boxall/DigitalTrends

Panasonic’s projectors were first used during the 2012 London Olympic opening ceremony, but between then and now, Panasonic has had an even greater degree of involvement. Panasonic’s Shunsu Sonoda explained:

“In London we just supplied the projectors. From Rio 2016, we had more involvement to create the entertainment with the projectors. We are inside, so we can do some testing, learn how to nicely show content, and be involved in the planning phase. Now for Tokyo 2020, it’s under discussion for what we can do together.”

I asked if it was fair to say Panasonic’s involvement would be even greater again, and he indicated that this is the intention. No confirmation could be given for this reason, and because the content of the opening ceremony is always a closely held secret.

Projection mapping, if the tech is new to you, uses projected light to create art on 3D objects. It’s part augmented reality, part digital video effect, and when used on a large scale can be jaw-dropping. The pressure to deliver is huge though.

“[The Olympics is] the biggest event watched on TV, and we can’t allow for mistakes,” Sonada continued. “If the projection fails, it is a problem.”

It’s important to Panasonic’s business, as it can promote its technology not just to the general public, but also to businesses who may want to buy the projectors too. Panasonic demonstrated its ability to impress with projection mapping when it put on a startling show during the “One Year to Go” Olympic event held in Osaka, Japan in July. Take a look at the video above to see what’s possible with Panasonic’s projectors.

Panasonic and the Olympics

Panasonic is one of the founding partners of the Olympic Partner Program, along with Visa and Coca-Cola, and has been steadily increasing its involvement with the Olympics over the past 30 years, and has currently confirmed it’ll continue the partnership until 2024.

Even the Panasonic philosophy of, “progressing society and the well being of people worldwide,” closely matches the Olympic Movement statement of, “building a peaceful and better world.”

For Tokyo 2020, it’s “home” Olympic Games, it is really stepping up its commitment. The foyer at the Panasonic Center is filled with Tokyo 2020 material, including the new mascots, plus there is a display of previous Olympic torches. It’s justly proud of its involvement, and seeing the tech already announced, along with hearing about the potential plans for the opening ceremony emphasizes all of this.

The Tokyo 2020 Olympics begins on July 24 and runs until August 9, while the 2020 Summer Paralympics starts on August 25 until September 6.