Phone cameras are perfect for viewing the pictures you take on an electronic display. Just try not to zoom in.

Phones like the Google Pixel 4 and Huawei P30 Pro take photos so good you really never need to carry around another camera. At least, that’s what we all say. For the most part, it’s true — but not always. Sometimes you take a photo so nice you want to turn it into a piece of art for your wall.

Above you’ll see what I think is the best photograph I have ever taken. It’s a shot of a sunset just starting to happen over a small lake high in the mountains, taken from the balcony of the small lodge that’s there for seasonal hunters and campers.

I need more art of fishing lakes in my office and I thought this photo was perfect.

And it looks good. At least it looks good here, where you’re looking at it on some sort of electronic display. It’s even cropped in tight using a bit of camera zoom so I could keep some other folks out of the shot. Maybe it’s not the caliber of photo you see from the famous people Apple and Google hire to use phones to take pictures around the world, but I like it.

I like it enough that I wanted to order a large print of it to hang in my office. You can do that right through Google Photos, by the way. Google will send you a large print on canvas or let you order a glossy 8 x 10 and pick it up at Walmart or CVS. That’s pretty cool, but I didn’t want to spend $50 on a 40-inch canvas but wanted something bigger than an 8 x 10, so I headed off to Walmart to do it myself.

Google Photos will let you order prints, but I didn’t like the size options so I went directly to the source: Walmart

Walmart will let you order a 36 x 24 (or 24 x 36 depending on how you rotate things) poster-sized print that you can frame yourself for $16. That’s a really great price compared to Google’s real canvas offering and I love to save money. So I did it.

When I went to the store a few days later to pick it up, it had turned out so badly, the nice person behind the counter didn’t even make me pay for it. She even explained that the software used to make it probably warned me it would look bad. Sure enough, it did; I retried it once I got home. 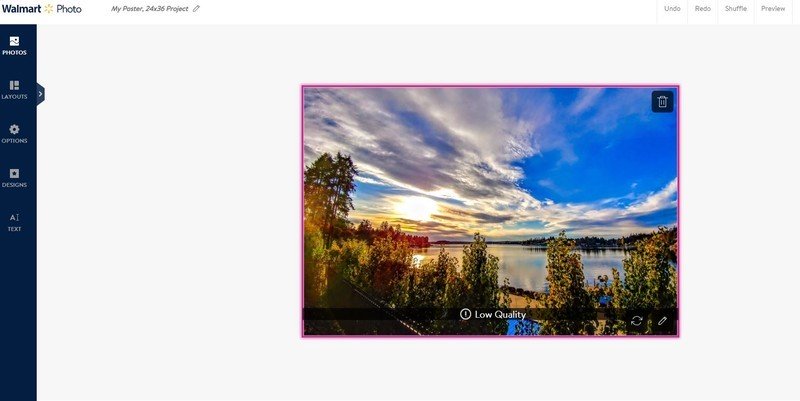 As I came to find out, this is a pretty common problem when you try to take a phone photo and turn it into something a lot bigger. And a three-foot wide print is a lot bigger. The nice person at Walmart who didn’t force me to pay for a crappy poster wasn’t sure why, but knew that almost every phone picture that someone wanted to turn into a poster looked like hot garbage. Because I just had to know exactly why, I looked on the internet.

You can make a photo taken with a good phone camera into an extra-large print. You just need to be a Photoshop wizard.

Shot On iPhone billboards look really good, and indeed, those giantic photos were shot on an iPhone. They were just edited by a professional first. It seems there is an image enlargement (dimensional, not Megapixel) technique called Bicubic interpolation that can build new pixels into a photo based on the average color value of the pixels that surround it.

In most photo editors, you can just hit a button and do it when you enlarge the size of a photo. But doing it that way still looks bad once you move past 12-inches or so. Larger photos can look good from afar, but as you move closer you see odd colored pixels scattered throughout the image. To do it right at 36-inches or roadside billboard size, you need to have a pro painstakingly edit a whole lot of pixels and do a lot of manual cropping, editing, and pasting to make a good poster.

You don’t have those problem (well you do on something really big but not on a 36-inch poster) when you’re using a “real” camera with a “real” sensor and a “real” lens. This is because even a phone sensor with a ridiculously large megapixel count is still using a very tiny sensor compared to a Micro 4/3 or APS-C-sized sensor, let alone a full size sensor you’ll find on the most expensive full-frame cameras.

The sensor is what takes in all the image information, not just light. Software that turns that information into a photograph can do more when it has more information. When we take photos with our phones, they look great on a phone screen or even a larger monitor. But again, they aren’t going to scale very well out to 36 inches because of the lack of detail once you blow them up larger than intended. It takes a lot of work in Photoshop to try and “add” information so an extra large print looks OK.

The Pixel 4 camera is still going to be good enough for almost every picture I’ll ever take. But I’m still going to take a “real” camera with me sometimes.

I still think the Pixel 4 camera is plenty good enough for almost every photo I’ll ever take. My Sony camera died over a year ago and every photo I’ve taken for work or play since has been done with a Pixel 3 or Pixel 4 and all of them were more than good enough. I also know that if I ever take a picture good enough to enlarge into a big wall print, none of them will be.

Phone makers have figured out how to take pictures of kids and dogs running around without them being blurry, so I’m hopeful that one day we can take photos that offer enough detail to blow them up to giant sizes. Until then, it might be worth packing a “real” camera for your next vacation or using one at your kid’s birthday party. For years, Sony’s RX100 series has been the go-to point-and-shoot camera for photographers everywhere. While we’re several cameras into the generations now, the original RX100 is still a great shooter, and costs a lot less than it used to.