How to add friends on your Nintendo Switch Now that the Nintendo Switch has been out for a few years, you’ll probably find yourself wanting to add co-workers and pals to your friend list. While the process isn’t too complicated, there are a few ways to add friends on your Nintendo Switch, and we’ve got the details below. Keep in mind that the Switch caps your friend list at 300 people, so make them count.

Although former Nintendo of America President Reggie Fils-Aime promised they wouldn’t be part of the Switch’s online infrastructure, alas, the Switch still utilizes a modified version of the “Friend Code” system seen on previous Nintendo consoles. Used on the Wii and, most recently, the 3DS family of systems, a friend code is a twelve digit password you can send to friends outside of the console, which they can then punch in to send a friend request.

On the home page, click on your account icon in the upper left-hand corner, represented in the image below as “Steve’s Page.”

Your friend code is available in two places: On the landing menu (Profile), and under the Add Friend menu. This is the code you should send your friends so they can find you. 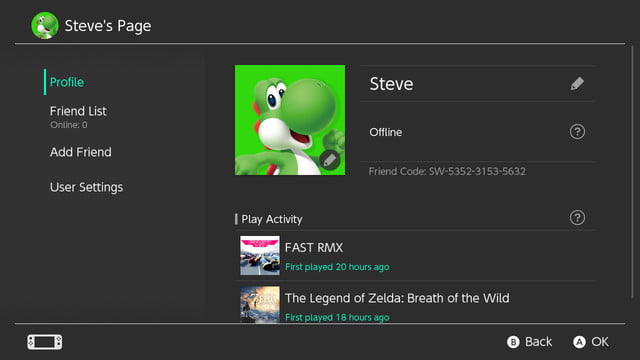 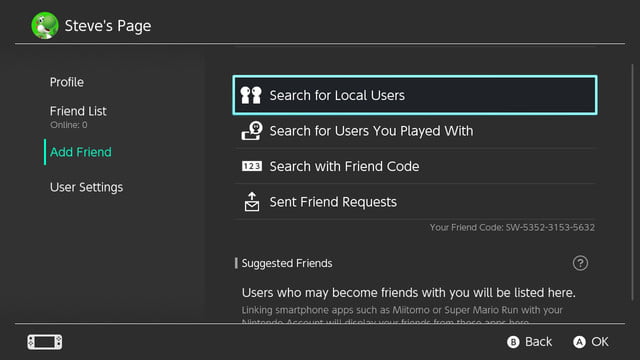 How to add a friend

On the user page, click Search with Friend Code and type a user’s 12-digit code to send a Switch friend request.

If entered correctly, your friend’s nickname and user icon will pop up, and you can confirm that you want to send the request.

Back at the Add Friend menu, you can check on your pending requests under Sent Friend Requests.

Unlike previous friend code systems, the user on the receiving end of the request does not need to know the sender’s friend code to become friends. Once accepted, the user will show up in your Friend List on the user page.

When someone sends you a friend request, a notification dot will show up next to the Add Friend section of the user page. The Friend Requests inbox at the top of the menu lets you know that someone has added you.

Click Friend Requests to see the requesting user’s icon and nickname. From here, you can either accept, reject, or block the user.

If you’re having a few friends over, you won’t have to bother with friend codes to add new pals.

You can search for nearby Switch players under Search for Local Users on the Add Friends menu of the user page. To find one another, you each have to click the same symbol. Our best guess is that this is a parental control feature, albeit not an incredibly sophisticated one.

After agreeing on a symbol, find the user’s nickname and icon and send a request.

Note that adding friends locally doesn’t go into effect until both users have logged onto the online service.

Out of the gate, the Switch seemingly lets you add users that you’ve played with before. After playing a multiplayer game, head over to the Add Friends section on the user page. Here, click on Search for Users You Played With. However, this option seems to only work for friends you played with over local wireless at this time. We played numerous online races in Fast RMX, but none of the users we played with have shown up here.

Friends from official Nintendo apps — Super Mario Run, Miitomo, Fire Emblem Heroes — linked to your Nintendo account will show up under Suggested Friends in the Add Friends menu of the user page. From here, you can skip the friend code process by clicking on a user and sending a request.

While this doesn’t technically net you more friends, you could end up exchanging friend codes by sharing images over social media. The Switch has a rather nice share feature that allows you to add image captions and create memes to upload to Facebook and Twitter.

On the user page, click on User Settings and scroll down to Posting to Social Media to link your Switch to your Facebook and Twitter accounts.

Once linked, go to the home page and select Album.

Unfortunately, the Switch doesn’t allow screen captures inside the album, but you can select an image, add a caption, and click Post to blast it across social media.

If you’re particularly fond of a particular friend, you can elevate them to Best Friend status. Navigate to your friend list and choose one of your favorite pals. Click the Best Friends option.

That user will now have a star in the upper left-hand corner of their icon. Sadly, your bestie won’t get notified of their newfound importance in your life as marking best friends is a one-way street, but the star could come in handy if you have a plethora of friends with the same avatar.

If you no longer want to be friends with a particular user, you can unfriend them. You can take it a step further by blocking the user, which prohibits them from adding you again.

Head over to your Friend List and select the friend that you want to remove.

Either pick Remove Friend or Block. If you change your mind later, you can go into User Settings and choose Manage Blocked-User List to open the door for becoming friends again.

As mentioned, Nintendo has said more streamlined methods for adding friends are in the works. At some point, you may be able to add friends via Nintendo Network IDs — user-picked names that are much easier to remember and share than 12-digit friend codes — and link your Nintendo account on social media. According to Nintendo, certain titles will also have in-game friend request systems to make it easier to connect.

There’s also the curious matter of User IDs, a separate username attached to your Nintendo account that became available a few weeks prior to the Switch’s launch. At first, it seemed that User IDs would replace NNIDs, but considering that Nintendo has plans for NNIDs in the future, it’s unclear if the new usernames will be used to add friends on Switch.

You should always back up your Android device in case of damage or loss. We'll walk you through how to do it.
Read more
How to

You should always back up your Android device in case of damage or loss. We'll walk you through how to do it.
Read more
How to

You should always back up your Android device in case of damage or loss. We'll walk you through how to do it.
Read more

You should always back up your Android device in case of damage or loss. We'll walk you through how to do it.
Read more

Amazon's search algorithm has been hijacked by bad actors.What you need to knowEarbud product listings on Amazon's online storefront have
Read more