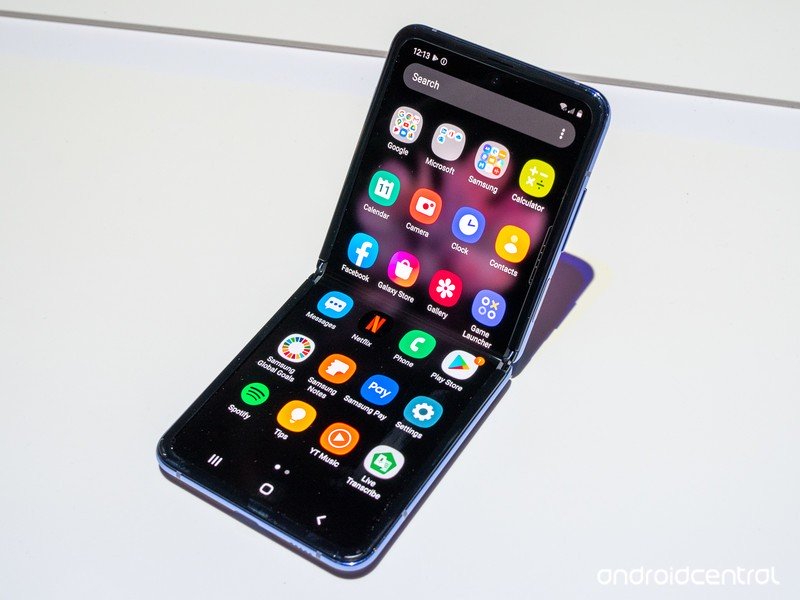 Prior to 2019, folding smartphones seemed like nothing more than a distant dream. However, thanks to innovations from the likes of Samsung, Huawei, and Motorola, folding phones are now more of a reality than they ever have been.

Following the rocky release of the Galaxy Fold last year, Samsung is now taking a different approach to foldables with the Galaxy Z Flip. Rather than create another phone and tablet 2-in-1 similar to what we already have with the Fold, the Z Flip takes the shape of a traditional smartphone that can be folded up to be extra portable.

Whether you’re interested in the Z Flip’s design, specs, price, or anything else in between, here’s everything you need to know about the phone.

A new way to fold

If you’re intimidated by the Galaxy Fold, the Z Flip brings Samsung’s folding tech to a much more accessible form factor. When it’s open, the Z Flip looks like any other Android phone. Fold it up, and it becomes incredibly portable and much easier to fit into tight pockets or small bags.

Before you get too far in this guide, we recommend starting off by reading and watching our hands-on coverage for the Z Flip.

In the video above, you’ll see our very first hands-on impressions with the Galaxy Z Flip while playing with it at Samsung Unpacked. Below is a link to our more detailed opinions after getting to use the foldable phone for about 25 hours.

The Galaxy Z Flip is not a perfect smartphone, but compared to the Galaxy Fold that came before it, it is substantially more durable and better-designed. The hinge feels fantastic, the “glass” screen is nicer to the touch (more on this below), and the flip-phone form factor is utterly joyful. There are some quirks with the Z Flip, such as its purposefully stiff hinge and puny cover display, but Samsung checked a lot of the right boxes.

We’ll update our review with additional thoughts and conclusions once we get more time with the Z Flip, but for right now, this is what we have.

Just about a year after unveiling the industry-changing Galaxy Fold, Samsung announced the Galaxy Z Flip on February 11 during its big Unpacked event in San Francisco.

With the Galaxy Fold, Samsung effectively created a device that was a 2-in-1. When the Fold is closed, it acts as a fairly typical Android phone (albeit one with a small screen). Open it up, and you’re presented with a miniature tablet that has much more screen real-estate than you’d find on a “normal” smartphone.

While the Z Flip also folds, it does so in a very different manner. Similar to the Motorola RAZR, the Z Flip looks like a fairly average handset when it’s opened up. The screen is a bit narrower and taller, but it’s nothing too drastic. Close the Z Flip, however, and you’re treated to a wonderfully small and compact square that’s easier to fit in tight pockets, purses, bags, etc.

We’ll likely see a more direct successor to the Galaxy Fold at some point down the road, but with two distinct form factors between the Fold and Z Flip, Samsung can cater to multiple audiences with two very different devices.

There is something the Z Flip shares in common with the Fold, and that’s an incredibly reliable hinge. Just like the Fold, the Z Flip is rated for 200,000 folds without any issues, meaning the hinge should last for around five years of normal use.

There are two displays 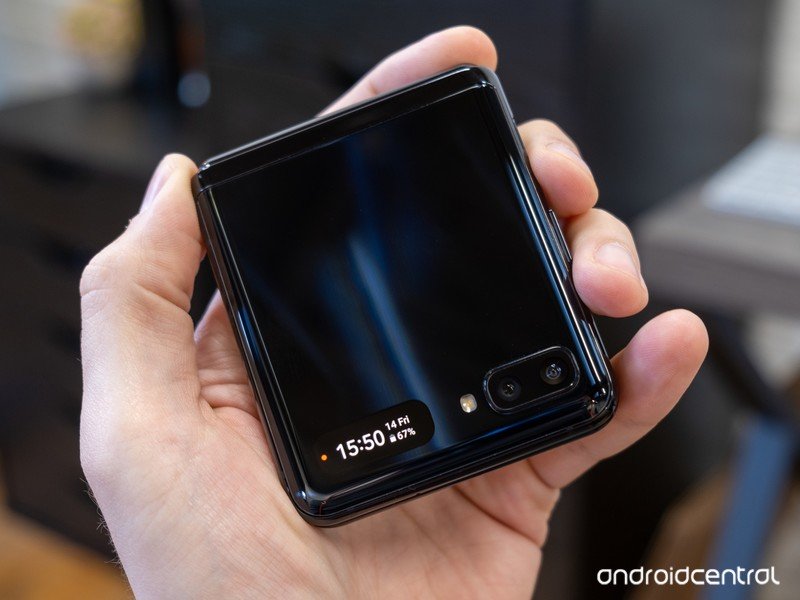 At first glance, it may look like the Galaxy Z Flip has just its main display and nothing more. Upon further inspection of the front of the phone when it’s closed, you’ll see that there is — in fact — a second screen.

It’s very small at just 1.06-inches, and while you won’t be watching YouTube videos or scrolling through Twitter on it anytime soon, it does allow you to answer phone calls, interact with incoming notifications, and the current time, date, and battery status. If you tap on a specific notification on the secondary display, that’s the app you’ll be taken to when you open the Z Flip.

Having a larger screen with more functionality would have been nice, but at the same time, it’s not like opening the Z Flip takes a lot of time or effort. As a supplementary way to deliver important information, the secondary screen serves its purpose just fine.

What you need to know about Samsung’s “glass”

When Samsung unveiled the Galaxy Z Flip, a lot of emphasis was given to the phone’s revolutionary “Ultra Thin Glass” that’s used for the folding display. Unlike the plastic used on the Galaxy Fold, the Z Flip is supposed to be much more durable and come with the usual scratch-resistance we expect with glass.

Unfortunately, that’s not a 100% accurate representation of what’s going on.

On February 16, popular YouTube channel JerryRigEverything uploaded the above durability test for the Z Flip. In the video, we see the Z Flip’s “glass” display get scratched at a Mohs level 2 hardness rating. Comparatively, traditional glass doesn’t scratch until level 6 with deeper grooves at level 7. Zack Nelson, the brain behind JerryRigEverything, even shows his fingernail making obvious indents in the Z Flip’s screen.

Shortly after the video was published, a Samsung spokesperson said that the Z Flip has a “protective layer” over the glass and is why the screen scratches the way it does.

Galaxy Z Flip features an Infinity Flex Display with Samsung’s Ultra Thin Glass (UTG) to deliver a sleek, premium look and offer an immersive viewing experience. Samsung’s first-of-its-kind UTG technology is different from other Galaxy flagship devices. While the display does bend, it should be handled with care. Also, Galaxy Z Flip has a protective layer on top of the UTG similar to Galaxy Fold.

That’s fine and dandy, but it doesn’t exactly line up with the boisterous claims Samsung makes in its marketing for the phone.

Meet the first-ever folding glass screen on a Galaxy. Yeah, we said folding glass. Made of Samsung Ultra Thin Glass, it sets you up for an epic view with a smooth, flat screen.

The Galaxy Z Flip’s display does feel noticeably nicer to touch compared to a flat-out plastic screen like on the Galaxy Fold, but it’s not substantially more scratch resistant. This is still a phone you’ll need to be gentle with, and that’s likely a sentiment we’ll see continue for the first few years of folding phones. That in itself is OK, but it’s important to know the difference between Samsung’s marketing for the Z Flip and the reality of actually owning one.

You can use the Z Flip’s camera hands-free 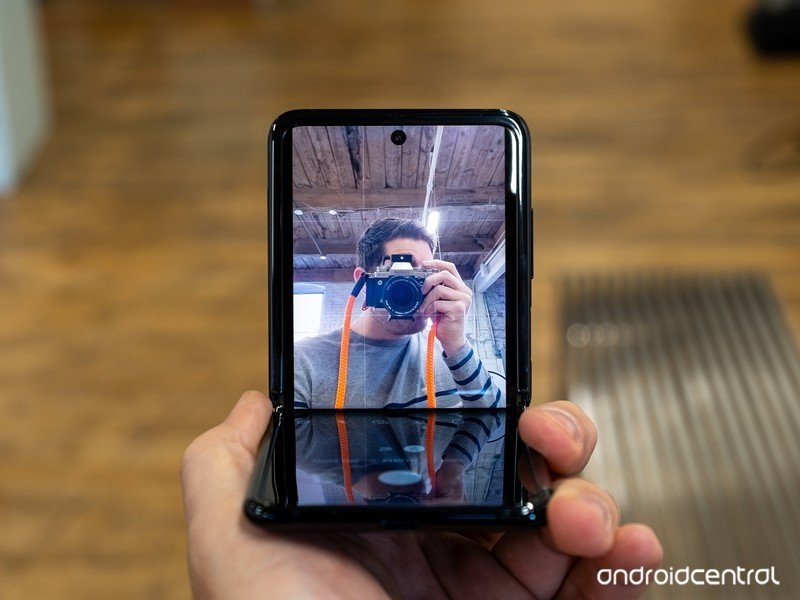 In addition to being more pocketable, the folding design of the Z Flip also lends itself to new ways to capture photos and videos with the phone.

When the Z Flip is half-folded so the bottom portion can rest on a table while the top sticks up, you can access a new hands-free shooting mode that allows you to easily take selfies or vlog at the perfect angle.

It effectively lets you ditch a tripod you’d otherwise need to get certain shots, and when the Z Flip is folded like this, the camera app switches to a specially-optimized interface that places all of the camera controls on the bottom portion of the screen and reserves the top section for your viewfinder.

If you don’t care about selfies or vlogging, this could also be useful for hands-free video calling (which also adapts its UI for this half-folded mode). 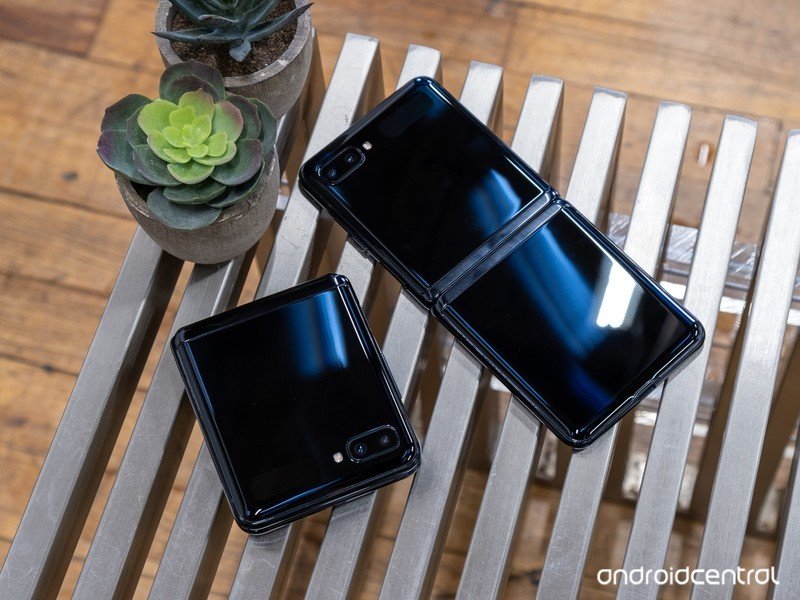 The futuristic design of the Z Flip is one thing, but that’s only half of the story. Powerful specs are a must when spending this much on a new phone, and the Z Flip is kind of a mixed bag in these regards.

Looking at this spec sheet, there are highs and lows. The Snapdragon 855+ is a very capable processor, but it’s instantly outdated when you consider the newer 865 is available in the S20. 256GB of internal storage and 8GB of RAM are both great, but the 3,300 mAh battery has us wondering how much endurance the Z Flip will be able to offer.

Nothing here is inherently bad, but for nearly $1400, it would have been nice to see Samsung offer the highest-end and specs possible.

Comparing the Z Flip to other smartphones 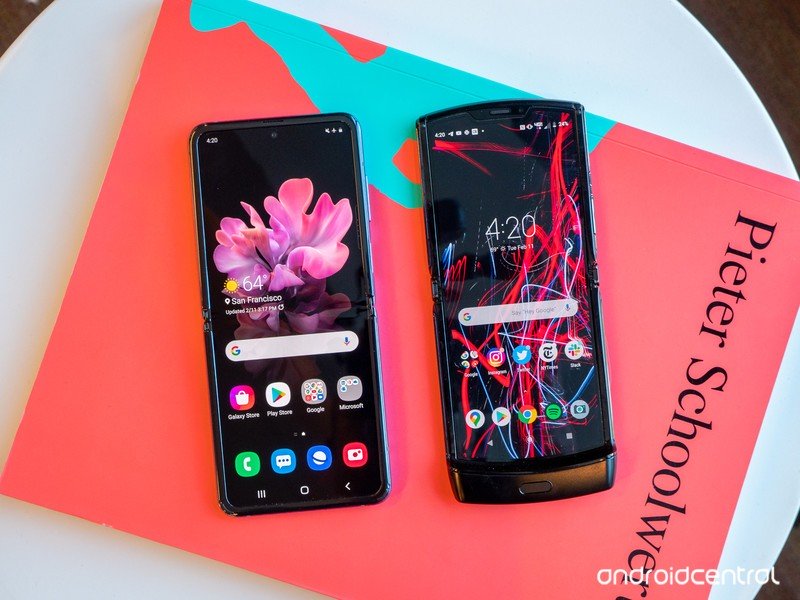 With folding phones being so new, the Galaxy Z Flip doesn’t have a ton of direct competition. However, that doesn’t mean we can’t compare it against some other handsets.

The Motorola RAZR is the most obvious comparison, seeing as how it has a nearly identical folding design. There’s also Samsung’s own Galaxy S20 Ultra, which is a traditional non-folding phone but has a very similar price tag.

And, of course, we had to pit the Z Flip against the Galaxy Fold to see how Samsung’s two foldables compete with one another.

Buying the Z Flip is a challenge, at least right now 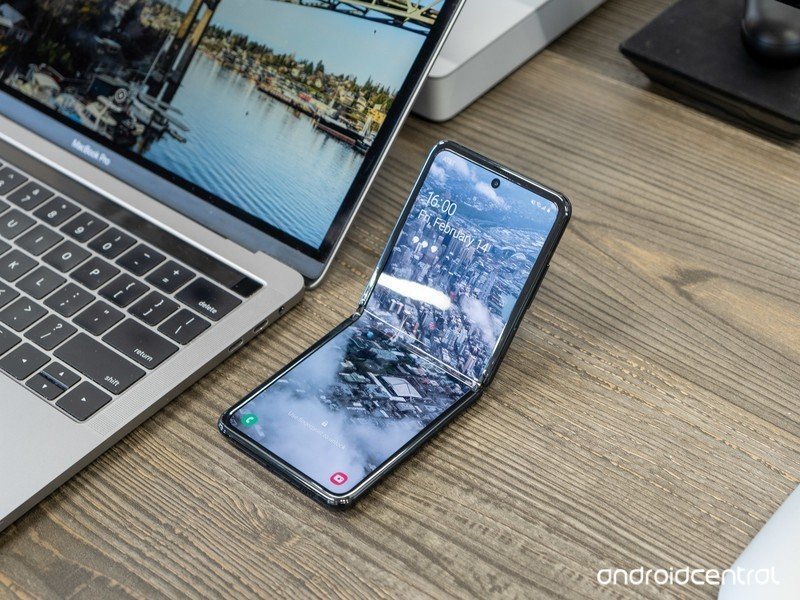 Samsung officially launched the Galaxy Z Flip on February 14, but it didn’t take long for the phone to sell out. As of right now, it’s pretty difficult to get your hands on the phone. Samsung’s online storefront got more inventory on February 21, but that batch was quick to sell out, too.

In the United States, the Z Flip is being sold through AT&T and Sprint as carrier partners, in addition to Best Buy and Samsung’s website.

The phone is available in Mirror Black and Mirror Purple, with other select countries also getting a Mirror Gold finish.

Where to buy the Galaxy Z Flip: Best Deals and Discounts in 2020

Be prepared to spend a lot of money 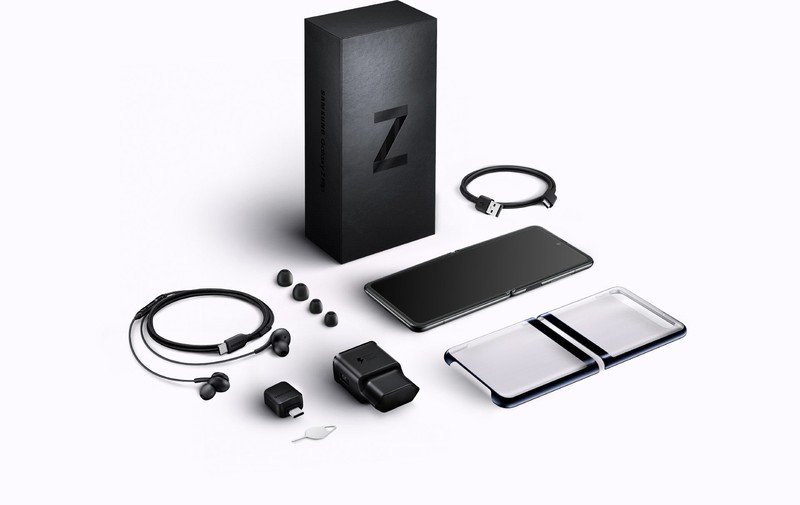 As you might expect, you’ll need to hand over quite a bit of money if you want to own the Galaxy Z Flip.

The retail price is $1,380, and while that is considerably more affordable than the $1,980 Galaxy Fold, it’s still bound to give some potential buyers sticker shock.

To help offset the cost a bit, Samsung throws in a few extras along with the phone itself. Customers get access to the Galaxy Z Concierge service, which is essentially a dedicated customer support line that’s available 24/7. Samsung also offers a one-time screen replacement just in case something goes wrong, allowing you to fully replace the folding display for $119 during the first year of ownership.

In the box, you get free USB-C wired earbuds and a clear plastic cover along with the usual accessories.

A new way to fold

If you’re intimidated by the Galaxy Fold, the Z Flip brings Samsung’s folding tech to a much more accessible form factor. When it’s open, the Z Flip looks like any other Android phone. Fold it up, and it becomes incredibly portable and much easier to fit into tight pockets or small bags.