Today Huawei announced its new P40 series devices. Three devices were showcased in the livestream event — the P40, the P40 Pro, and the P40 Pro Plus. Similar to previous devices from the firm, these new phones have a significant focus on photography and have the spec sheets to back up the marketing.

I’ve had some hands-on experience with the P40 Pro in particular, and today I want to run you through some of my initial impressions. If you’re more interested in specifications, click here to check out our separate in-depth Huawei P40 Pro specs post.

There are three versions of the P40, all based on the same chipset, software, and main wide-angle 50MP RYYB “Ultra Vision” camera. The Pro and Pro Plus share a very similar chassis, with the only external distinction being in the camera module and the build material. Whereas, the P40 is a smaller device with slightly thicker bezels and a less advanced screen.

The main differences can be found in the displays, cameras, and charging technology. TL;DR, on paper, the P40 Pro seems to be an excellent middle ground between the hardcore P40 Pro Plus and the stripped back, simpler P40. 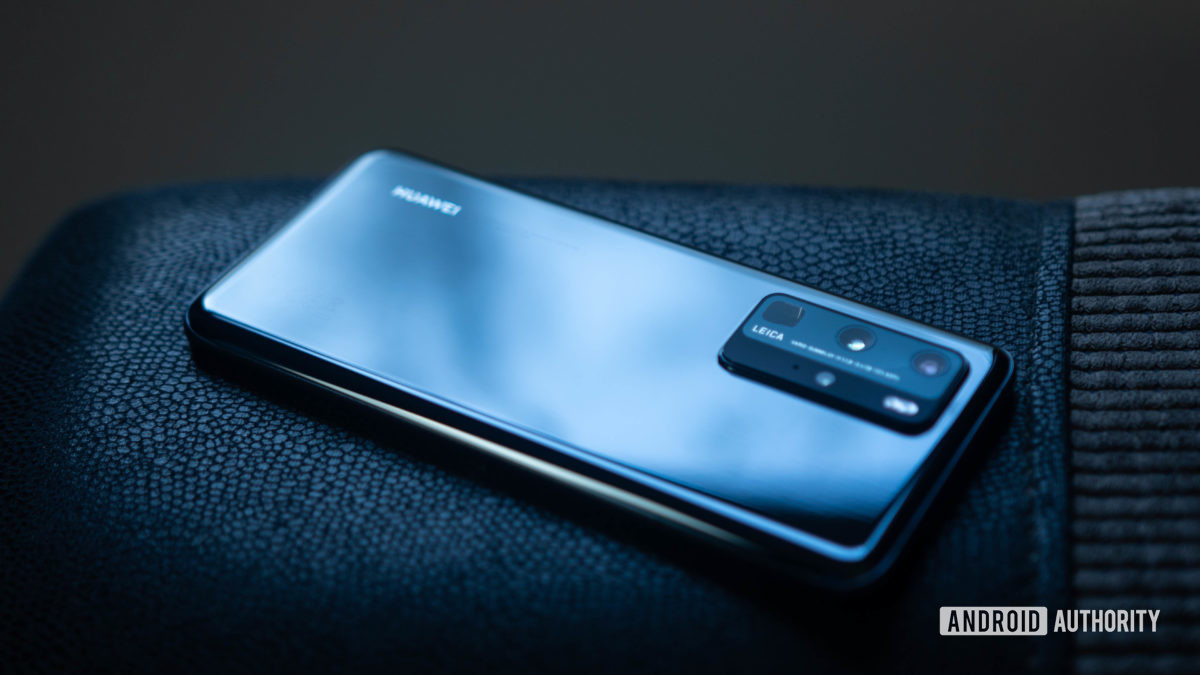 Huawei has kicked it up a notch in the design department. Gone is the aging waterdrop notch, in favor of a left-aligned punch hole. This instantly makes the P40 Pro feel heaps newer than its predecessor, due to the ubiquity of this design feature in the smartphone market. Many competitors have adopted the punch hole, and so this handset fits right in with the rest.

While we’re at the front of the device, we’ve got to talk about that curvy glass. It’s designed in such a way that all four edges are tapered into the metal rail that surrounds the screen. Huawei told us that it’s designed to mimic the way water looks just before it breaks the surface tension. It certainly looks unique. But the effect is more noticeable under the finger. Swiping in from all four edges feels really natural as your finger seems to glide in instead of catching on harsh transitions from glass to metal. 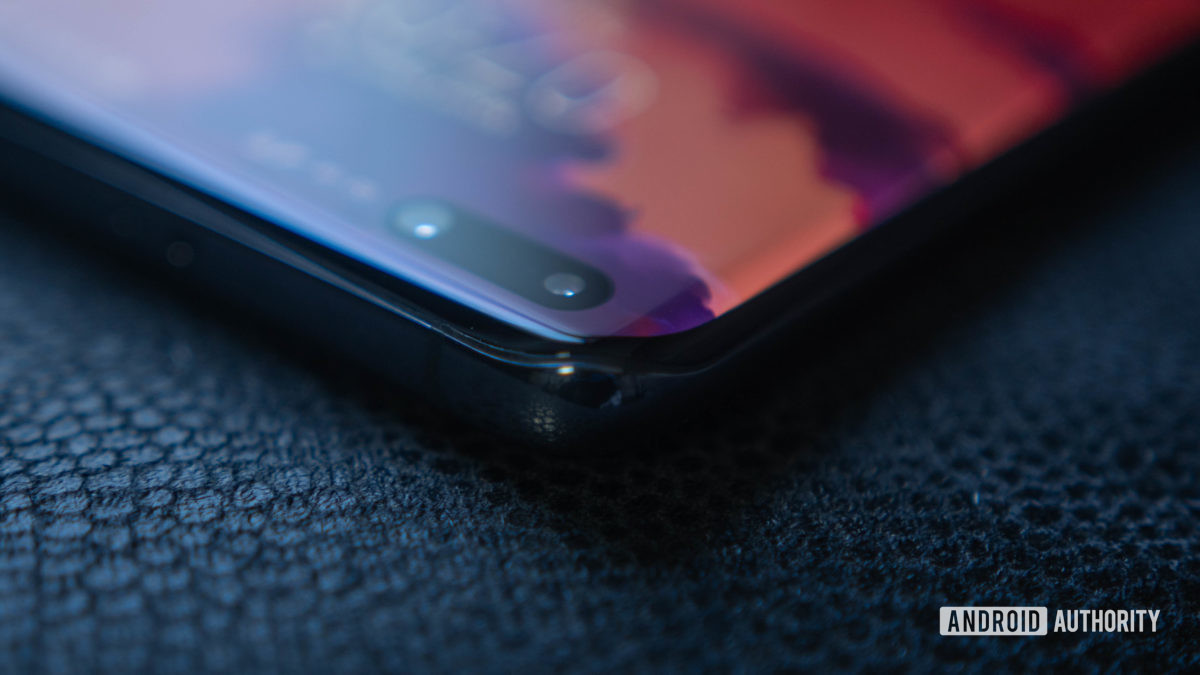 Venturing around the IP68-rated handset, we find an IR blaster and microphone at the top; a volume rocker and colored power button on the right; a speaker, microphone, USB-C port, and SIM/memory tray at the bottom; and nothing on the left side. The shiny metal rails are surprisingly easy to hold thanks to the tapered shape that makes the phone feel like a bit of a wedge, enabling it to fit quite comfortably in the hand. The available colors are Ice White, Deep Sea Blue, and this Black model that I’ve had hands-on with.

Around the back, Huawei has made use of the ever-popular “stovetop” camera housing design. There’s no getting around its size, it’s a hump. This sits in the same spot as last year’s more streamlined camera bump, and, as big as this new setup is, it does at least pack a lot of hardware.

It’s all about that camera 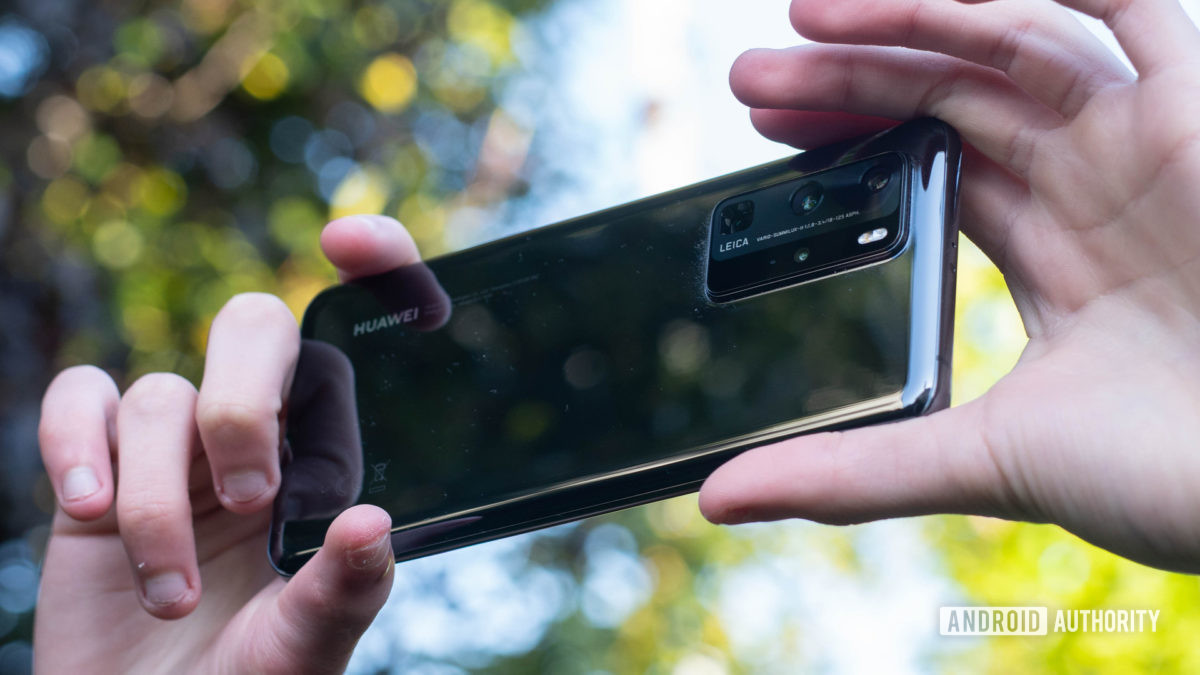 Every year, the Huawei P series has a heavy focus on its camera systems, and with the P40’s tagline being “Visionary Photography,” the trend doesn’t stop here. Here’s what you need to know about the Huawei P40 Pro’s camera.

Since Huawei innovated with the P30 Pro’s 5x periscope zoom back in 2019, several of the firm’s competitors have implemented a similar zoom system. That means that the technology has had a bit of time to mature and be refined. The P40 Pro shares a very similar 5x optical zoom range via the periscope hardware, however, this time the sensor behind it has been swapped out for something beefier.

The 5x periscope zoom gets an upgraded 12MP RYYB sensor

We’re treated to a 12MP sensor with a similar RYYB Bayer filter to what Huawei has been using on its main cameras over the past year. This should allow for more light information to hit the sensor along with more detail, for overall sharper-looking images. The 125mm-equivalent lens has an aperture of f/3.4 and optical image stabilization (OIS). The ultra-wide Cine lens that came in the Mate 30 Pro seems to be used in the P40 Pro as well. It’s a 40MP sensor with an 18mm-equivalent lens with an f/1.8 aperture. This was one of the best ultra-wide cameras of last year, so seeing it here in the P40 Pro, whilst not groundbreaking, is a nice addition to the P series.

But the big news is that massive 50MP Ultra Vision RYYB wide camera. It sports a massive 1/1.28-inch sensor with a 23mm-equivalent lens and an aperture of f/1.9. It’s the biggest camera sensor in a smartphone at the moment, eclipsing the Galaxy S20 Ultra’s 1/1.33-inch 108MP setup. This large sensor should mean cutting-edge low-light photography, something that Huawei devices continue to innovate on every year.

Aside from the 7,680fps slow-motion, that’s been adopted from the Mate 30 Pro, there’s nothing fancy going on with video modes. The highest resolution you can shoot in is Ultra HD video at up to 60fps, the standard on flagship smartphones for over a year now.

Around the front, inside that punch hole, resides the 32MP selfie camera, the depth sensor, and an autofocus laser. It’s rated for Ultra HD video recording at up to 60fps. It’s not binning in its photo mode, so the output images are in fact 32MP files. 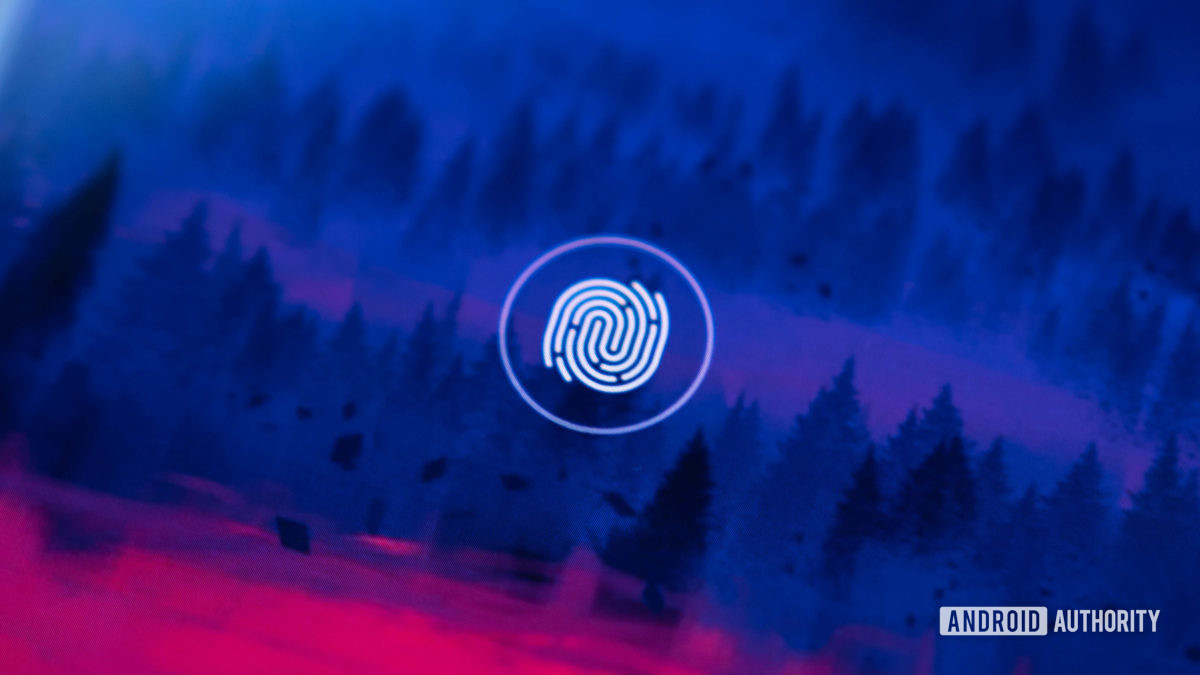 With cameras taking up the majority of this Huawei P40 Pro hands-on look, I wanted to talk about some other interesting aspects of the device. First up is that the in-display fingerprint scanner is 30% faster and 30% larger according to the company, and my first impression is that this is definitely an improvement over the P30 Pro’s scanner. It’s still optical and is in a similar position, but seems to pick up my print far more often and noticeably quicker.

The P40 Pro’s 90Hz display is a first from the company and whilst it does help the phone fit in with more recent handsets, I feel like it could be too little too late. The rest of the industry has all but moved onto 120Hz panels, whether they be at FHD+ or QHD+. The fact that this device sports a slower and lower-resolution screen than the Oppo Find X2 Pro is not a good look. We’ll just have to see how this display holds up in our testing suite. Surrounding that display, the bezels might be thin, but I noticed that the corners of the display don’t seem to align with the edges of the metal and glass, leaving the front of the phone feeling a bit miscalculated and messy. This seems to be a byproduct of having the corners of the phone raised to contrast with the four curved edges. It’s really weird to look at, and I’m not sure that I agree with Huawei’s design choices this time around.

There’s no breakthrough in topping-up-tech this year, at least in the conventional sense. Huawei’s 40W wired charging has been around since the Mate 20 Pro from back in November, 2018. However, the P40 Pro is now capable of that same 40W charging in wireless form. That’s up from the P30 Pro’s 15W and the Mate 30 Pro’s 27W. That puts the P40 Pro’s wireless charging up there with the fastest in the industry. 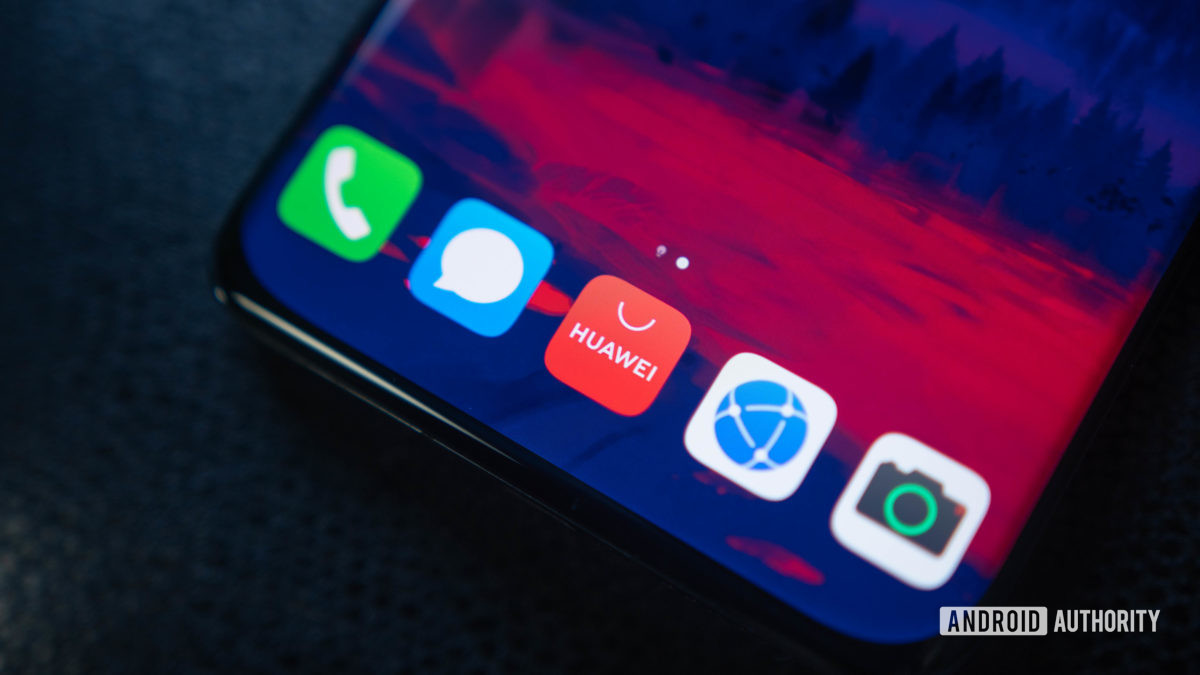 The biggest concern for consumers looking to purchase a Huawei device in 2020 is going to be that of Google services, or rather lack thereof. The Huawei P40 Pro will not be shipping with Google Mobile Services (GMS). Therefore, you will have to rely on Huawei Mobile Services (HMS) and their AppGallery as part of EMUI 10.1 based on Android 10.

This hit me as soon as I powered on the device for the first time, as you are now forced to log into HMS during setup. I then immediately tried to download LastPass and Spotify — my two go-to apps. It was then brought to my attention that these apps were not available on AppGallery, and LastPass, in particular, was not available from alternative app stores, either. That means that getting all of my apps on the phone may be nearly impossible.

I will continue to read into and learn more about AppGallery during my review time with the P40 Pro. As a first impression, however, this was not a good one. Huawei tells us that it’s bringing in more apps to AppGallery every day, but there are still many key players still missing such as Instagram, Twitter, YouTube, Netflix, and Disney Plus.

Huawei launches Celia: A Google Assistant rival in the West

What to expect after my blind date with the Huawei P40

What do you think about the new P40 series? Let us know in the comments! Just $19, this 30 hour training readies you for Cisco CCNA exams